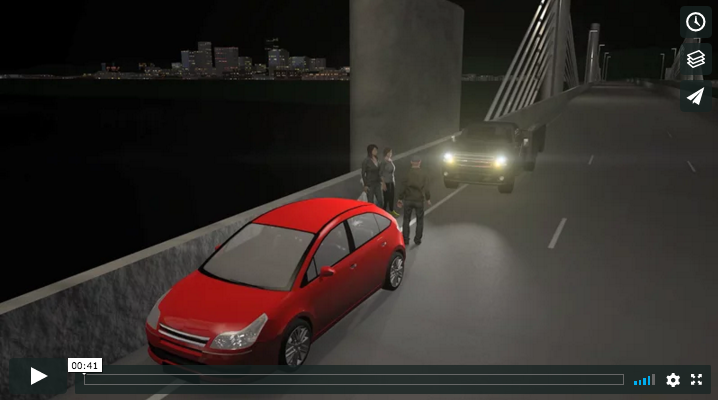 Case Study: In a Challenging Case, Life Altering Injuries are Brought to Light with Video

When representing plaintiffs in a personal injury case, one challenge that can arise is how to illustrate the plaintiffs’ injuries if they are currently not visible. This was the case for the law firm of Walsh Woodard LLC in West Hartford, Connecticut when they represented two young women, cousins and best friends in their twenties, who suffered multiple injuries in a horrific incident in 2015.

After their car became disabled and caught fire while traveling on a bridge, the friends pulled over and exited the vehicle. They were immediately helped by a Good Samaritan who pulled up behind them and extinguished the fire. Shortly afterward, another driver who was exceeding the speed limit crashed into the Good Samaritan’s pickup truck, causing it to pin the women against the guardrail on the bridge. Both women were left with severe injuries and spent months in orthopedic rehabilitation.

Today these strong young women present perfectly fine, and would have walked into the courtroom with no visible injuries. However, each continues to suffer from lasting physical and emotional effects that have been life-altering.

Attorney Michael Walsh turned to Geomatrix Productions to create a settlement video to impress upon the mediator and claims representatives the significance of the plaintiffs’ claim. In addition to poignant and emotional interviews with the plaintiffs and their friends, the video graphically recreated the terrifying chain of events. Attorney Walsh sent the video far in advance to all involved to make sure they had ample opportunity to see these articulate and promising young women up close and personal as they recalled the day that changed their lives forever.

“Geomatrix’s video was instrumental in helping to persuade the mediator and claims representatives to settle at mediation for a good result by illustrating the plantiffs’ underlying injuries in a compassionate and compelling way, as told in their own words,” said Attorney Michael Walsh. “The power of video to dig below the surface of face value first impressions is undeniable. It was a valuable tool to overcome the challenges we had with this case.”