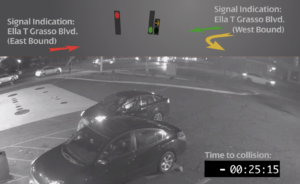 Security cameras can be found almost everywhere, and a surveillance recording capturing an accident makes for a compelling piece of evidence. But what happens when a key piece of the story happens just outside the frame?

The victim of traffic accident came to Attorney David Leff, with an unfortunate story. He sustained serious injuries when his car was struck by a vehicle turning left across his path. But the other driver told police he had a green arrow and found a witness at the scene who backed him up. Video from a nearby parking lot captured the crash, but the camera was set too low to show the traffic signal. When the responding officer ticketed his client instead of the other driver, there seemed little hope.

Attorney Leff asked Geomatrix to analyze the video and see if there was more to the story. We visited the scene and recorded the traffic pattern from a vantage that showed the traffic signals. Matching the patterns in the new recording with the cars in surveillance footage, we were able to synchronize the movements of the cars with the known signal pattern over several cycles leading up to the collision. We then created an annotated video that clearly showed what happened.

The protected turn signal for the westbound driver had ended almost 25 seconds before the collision. By the time of the collision, both drivers had a green signal and it was the left turning driver who failed to yield. The video was used in mediation and left no doubt as to the circumstances of the crash. The insurance company for the other driver agreed to settle for the policy limits.

For over 40 years, Geomatrix has helped attorneys present powerful demonstrative evidence both in and out of court . Careful analysis of surveillance and bystander video can help determine facts, unmask hidden details and set the record straight for your clients.