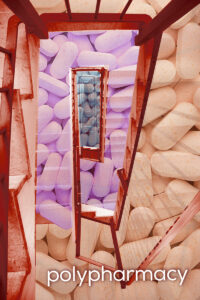 There’s an art, and a science, in telling a compelling true-life story on camera.  On the one hand you need to get the facts and figures, the names, places, and circumstances that address the events in question.  On the other hand, you need to capture the emotion, the intention, to portray the real and genuine person in front of the lens.  When done correctly, the balance of these two disciplines will make a world of difference in a legal case.

The challenge… was to clearly demonstrate the damaging effect the prescribed treatment had on their client over the course of several years.

“The issues in this particular case were unlike any I’d ever seen and unlike what the expert witnesses I brought into the case have seen,” said Attorney Patrick C. Barry of Decof, Barry, Mega & Quinn.  “The physician had prescribed multiple opiates along with benzodiazepines to be taken simultaneously over a period of years” with what appeared to be an ever-changing medication regimen. Attorney Barry relates that this “polypharmacy treatment” was an extreme prescribing practice that could not be explained by any current standards.

The challenge that faced the Legal Team at Decof, Barry, Mega & Quinn, in Providence, RI, was to clearly demonstrate the damaging effect the prescribed treatment had on their client over the course of several years.

In this later stage leading up to trial, the client wasn’t presenting obvious signs of notable distress as they sought help through an inpatient hospitalization program. However, the client was in a constant struggle to recover and stop the downward spiral their life had become.

The Case for Video:

“One of the reasons we wanted to make sure we had a video presentation is because live video, where the person is telling their story, more closely reflects the true human interaction that we would make with one another, or that a jury would experience if someone was in the courtroom,” declared Attorney Barry.  “That true human interaction has a lot of components to it; word choice, timing, movement, gestures, and speech pattern. These things can’t be picked up from a black and white text description.”

“The team at Geomatrix were able to capture my client in an honest and natural way” said Attorney Barry, “they were able to find the key moments. It wasn’t just turn on a camera and start talking, there was a journalistic and artistic component to match up the person with the story and capture the emotion.”

I don’t think the case would have settled without the video.

“I’m sure the defendants and the carriers may have looked at the case like there’s no real injury  because the client appeared ok” said Attorney Barry. “I’m convinced that the video presentation which allowed them to make some character and credibility determinations allowed them to see the actual hurt that did exist. I don’t think the case would have settled without the video.”

At Geomatrix we are dedicated to the craft of narrative storytelling.  We have honed that craft for more than 40 years in an effort to give our clients the tools they need to win the case.  Let us help you uncover the behind the scene stories of your clients that will make a difference in giving you the best outcomes.